Athenian aid to the Greek cities of Asia Minor has prompted imperialist Persia to invade mainland Greece twice. Each time, Athenai proved pivotal to its defeat, winning a stunning final naval victory at Salamis in 479BC. Its prestige at an all-time high, Athenian military hegemony, as well as trade and cultural supremacy, now seems likely, and with it a chance for revenge. This state of affairs, of course, how it should be; Athenai leads the Greek world in mathematics, science, philosophy and architecture - it should be its protector also. However, Sparta resents this new found influence. Just fifty years after the end of the Persian invasions, war once again looms over the Peloponnesus. The prize is effective control over the entire country; Athenai's naval might is matched by Sparta's superior land forces, either city - or indeed its Korinthian or Boiotian allies - could emerge from the ensuing conflict, victorious, to claim it! 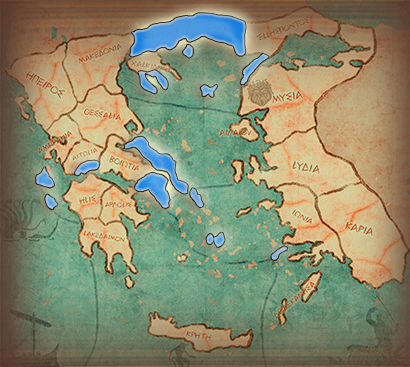 Alkmaionid Family
The Alkmaionids are a powerful Athenian family who first came to prominence in the 7th century BC. Although ostracised on several occasions, they have always returned to the city.
Playable: True
Initial Power: 29

Centre of Culture: +10% all culture income

Dreams of Empire: -10 happiness in all regions

Aristocratic Party
For many years Athenai has been dominated by aristocratic families that control much of the wealth and land. Democratic reforms have reduced their influence, but not removed it entirely.
Playable: False
Initial Power: 26

Populist Party
Whilst there are no true political parties in ancient Athens, voting blocs are naturally formed from those holding similar views. Amongst them, there is always a group that follows the will of the mob.
Playable: False
Initial Power: 24