Unified under an oligarchical system of government, Korinthos has become rich from trade due to its geographical position, using the wealth to launch public construction projects on a large scale and forge colonies as far afield as Sicily. Following a period of tyranny, it allied with Sparta, fighting to repel the Persian invasions as part of the Hellenic League. Although Korinthos supported the Athenians during the Greco-Persian Wars, Athenai’s backing of the rebel colony of Korkyra in its struggle against Korinthian rule has caused hostilities to break out between the two great cities. A naval confrontation is sure to ensue, so Korinthos will need a strong fleet if it is to deny Athenian naval supremacy. Yet Korinthos’ sizeable citizen army also makes it a dangerous proposition on land, and far more than a mere foil to the expected Spartan battlefield supremacy… 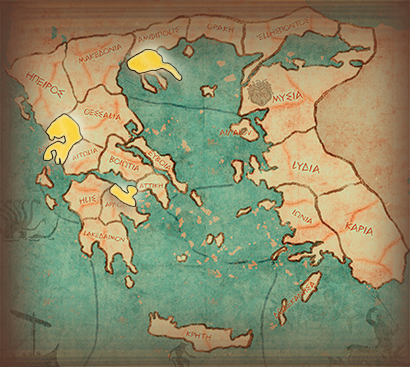 Autocratic Party
Although the tyrants of Korinthos are long dead, there are those who believe power should be wielded by a single, strong ruler.
Playable: False
Initial Power: 18

Conservative Party
In all political systems there are those who are happy with the state of affairs and those who will do anything to change it.
Playable: True
Initial Power: 32

Love of Aphrodite: +2 growth in all regions

Shadow of Athens: -10% to all manufacturing income

Populist Party
Where there are politics there are people who will play to the crowd if it gets them into power.
Playable: False
Initial Power: 27

Tyrannic Party
Korinthos was once ruled by a great line of tyrants. Thinking it a great and glorious time, there are those would see it ruled that way once more.
Playable: False
Initial Power: 23