One of several confederations of warlike Germanic tribes that spilled across the River Rhine from Germania during the Migration Period, the Franks have wasted little time in taking advantage of their situation.

Amidst the collapse of the Roman Empire in the West, they fought as foederati for the Romans in exchange for land in Gaul, and by the end of the 5th century AD there were many petty Frankish kingdoms across northern Gaul. Eventually, Tournai, under Childeric I, rose to dominate the region with Rome’s help. However, his son, Clovis I, knowing that the Western Empire was all but dead, turned on and defeated the Romans at the Battle of Soissons around AD486, going on to unite the Franks as a single kingdom under his leadership by AD509.

Now, his four sons rule, with all the internal feuding and internecine plots that such arrangements entail. Yet the Frankish Kingdom is also strong without; Clovis’ fourth son, Theuderic, is poised to eclipse its neighbours – and one-time allies – the Burgundians, and to the south, the last foothold of the Visigothic Kingdom on Gaulish soil. There is also the question of the Ostrogoths, who flounder now that Theoderic the Great lies dead – their lands are ripe for the taking too, if Rome doesn’t get there first. Yet the noble blood of Childeric and Clovis flows through the king’s veins; he alone can unite his people; he alone will see the Franks become the sole power in Gaul, and beyond! 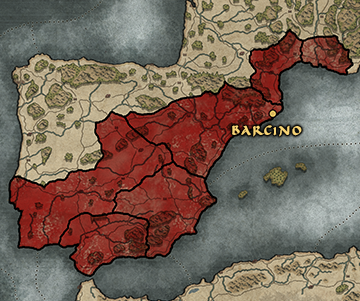 Other Nobles
Although ordinary people participate in civil government, the elders of the nobility are the wisest, and therefore the most qualified to give council.
Playable: False
Initial Power: 50

The Visigothic Kingdom
Former foederati of the Western Empire allowed to settle, the Visigoths ruled for some time in southern Gaul and northern Hispania, over a largely independent kingdom. However, since the collapse of the Western Empire, the neighbouring Franks have pushed them out of Gaul altogether.
Playable: True
Initial Power: 50

Persuasive: High rate of religious conversion in all owned provinces.