The Ostrogothic Kingdom has succeeded where the Romans failed. The Battle of Ravenna in AD476 - Rome's final humiliation - signalled the ignoble end of its Western Empire. In its place was the Kingdom of Italy, helmed by the victorious Germanic general, Flavius Odoacer. However, although he was officially recognised by the Eastern Emperor Zeno as 'patrician', Imperial favour is fickle and Odoacer eventually came to be considered a rival claimant to the throne.

As such, by AD488 the Ostrogothic king, Theoderic, had been contracted to depose and supplant him as the Emperor's man in Italy. After four years of war, Theoderic emerged victorious and in AD493, after murdering Odoacer at a banquet, assumed control of all Italy. He ruled benevolently, becoming a patron of the arts and architecture and subsuming much of the Western Empire's administrative infrastructure into his own kingdom. However, Theoderic's death in AD526 destabilised the Ostrogothic Kingdom, as his grandson - still a child - ascended to the throne under the regency of his mother, Amalasuntha. Eventually, she appealed to the new Eastern Emperor, Justinian, to intervene. Her subsequent murder by rivals has given Justinian the 'casus belli' - literally the 'case for war' - he needs to reconquer Italy and reclaim the ancient seat of Imperial power.

The future of the Ostrogothic Kingdom remains uncertain - the Romans encroach with vengeful determination - and so the current incumbent must be wary if he is to retain control. However, the Ostrogoths seized this wealthy land through much skill and spilled-blood - no man, Roman or otherwise, will wrest it from their iron grasp without a fight! 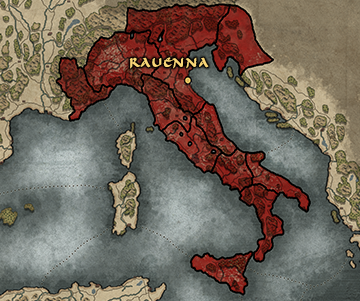 Other Nobles
Although ordinary people participate in civil government, the elders of the nobility are the wisest, and therefore the most qualified to give council.
Playable: False
Initial Power: 50

The Ostrogothic Kingdom
Since seizing Italy from the hand of Odoacer, the Romans’ treacherous client king, the Ostrogoths have entered a golden age of prosperity and progress. However, recent dynastic struggles following the death of Theoderic the Great have made them vulnerable to attack from all sides.
Playable: True
Initial Power: 50